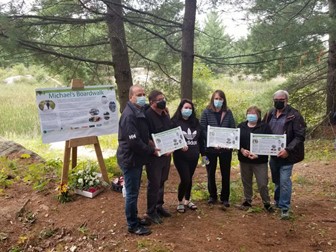 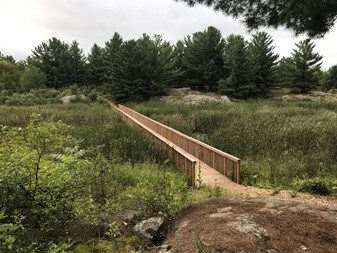 (North Bay, Ontario, September 3, 2021)   Family and friends of 28-year old Michael Gauthier gathered in Laurier Woods Conservation Area this morning to dedicate a new 180 ft boardwalk built by his friends and family to honour his memory, his passion for the outdoors, and his love of Laurier Woods.

“Michael and Samantha hiked the trails of Laurier Woods trails daily.  It was a large part of their lives and a spot where they made so many memories.  They even had their wedding photos taken there,” said Michael’s father-in-law Don Seguin who initiated the project with the North Bay-Mattawa Conservation Authority and Friends of Laurier Woods who co-own the property.

Michael’s friends and family, as well as a number of local contractors and suppliers who contributed to the construction of the boardwalk, came together March 2020 to help in the construction and remember Michael.  They gathered again today on the third anniversary of his sudden passing during an outdoor fishing trip in 2018.

“We are grateful to Michael’s family for honouring his memory in this way.  Michael’s boardwalk will make it possible for everyone who experiences the Laurier Woods trails to appreciate the environmental significance of this area for years to come.  It’s a lasting legacy,” said Dave Mendicino, NBMCA Chair.

The boardwalk connects the 1 km purple trail at Laurier Woods which ended at the pond and marsh.  The trail which meets the south side of the pond was cleared in February 2020.   The boardwalk affords a view of a marsh which is home to two species at risk:  Blanding’s turtles and the Gypsy cuckoo bumblebee.   An interpretive sign about the environmental assets of Laurier Woods and the significance of the boardwalk was erected on “Michael’s Boardwalk” in the spring.  The dedication had to wait until COVID rules allowed for an outdoor gathering.

NBMCA worked with the Ministry of Natural Resources and Forestry to ensure the boardwalk was constructed in a way and at a time that would respect the species at risk.   The river-stone filled cribs and stringers supporting the boardwalk are made with rough cut hemlock.

Michael's memory continues to be celebrated by his wife Samantha, as well as his parents Mark and Ruth Gauthier and Don and Michelle Seguin, his brothers Raymond and his partner Adam Hewitt, Graham and his wife Joy, Jordan Seguin and his grandmother Lois Carey.

The Laurier Woods Conservation Area is owned and managed jointly by the North Bay-Mattawa Conservation Authority and the Friends of Laurier Woods.  The 240 acre conservation area encompasses a provincially significant wetland, rocky outcrops and upland forest, and is a sanctuary to a broad range of wetland and woodland creatures and migrating birds.  The trailhead is located off Brule St., just off Franklin St.

The North Bay-Mattawa Conservation Authority (NBMCA) was founded in 1972 by the Province of Ontario and the NBMCA’s 10 member municipalities. A non-profit organization, the NBMCA works closely with the public to balance human needs with the environmental needs of the region’s watershed. The NBMCA is one of 36 Conservation Authorities who are members of Conservation Ontario.