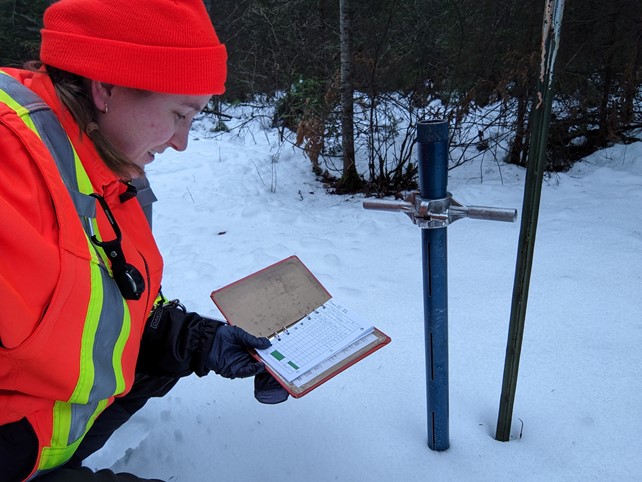 (North Bay, Ontario, January 4, 2023) Although we received a substantial amount of snow leading in to the holidays, the warm weather and rain throughout the holidays only shows a snow depth increase of 7.7 cm since December 14, 2022 reports the North Bay-Mattawa Conservation Authority (NBMCA) who measures snow depth and water content as part of its Flood Forecasting and Warning Program.

“Overall snow depth and water equivalence remain below normal for this time of year, with the exception of snow water equivalence in North Bay which is 90% near normal” said Angela Mills, NBMCA Water Resources Specialist. “The average snow depth is similar to the conditions at this time last year”, she added.

“Snow survey readings are taken bi-weekly from December until the spring freshet (usually March) and weekly afterwards until the snow has melted” said Chitra Gowda. CAO/Secretary-Treasurer.  “Snow surveys are part of NBMCA’s role in the Provincial Flood Forecasting and Warning Program.”  NBMCA and our 10 member municipalities prepare for, track and manage local flooding. Advanced warning enables municipalities to put emergency plans into operation, evacuate communities if necessary, and secure property in areas that are more likely to flood” she added.