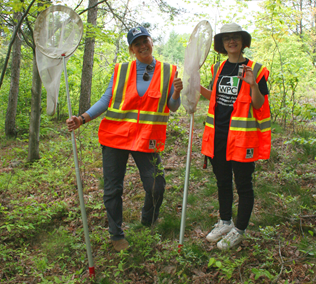 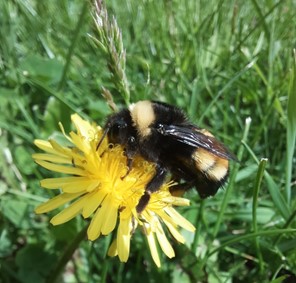 (North Bay, Ontario, June 15, 2022) It was good news for a number of bee species in Laurier Woods Conservation Area when Wildlife Preservation Canada’s (WPC) bee research team’s turned up a number of species on the decline during their recent spring survey to locate rare and declining bumble bees throughout Ontario.

“It was very exciting to find the Yellow Banded Bumble Bee, as this was the bee we were looking for as it is of special concern in Ontario and we also seen a Gypsy Cuckoo Bumble bee which is also on the Species at Risk list in Ontario”, she added.

During early spring surveys (April, May, and June), WRC field crews collect yellow-banded bumble bee (B. terricola) and brown-belted bumble bee (B. griseocollis) queens for use in WPC’s conservation breeding program. Captive breeding is a recognized ex-situ tool effective at helping to bring a species back from the brink of extinction. The yellow-banded bumble bee is closely related to other declining bumble bee species in Ontario and as such, is a model species for use in ecological research projects, captive breeding and husbandry studies, and investigations into declining bumble bee biology and natural history.

“Overall, WRC told us they had a very successful day and may return to Laurier Woods Conservation Area to search for more bees in the future.  It’s good news for our local population of pollinators,” said Troy Storms, Manager Lands and Stewardship.

Wildlife Preservation Canada exists to save animal species at risk from extinction in Canada by:

·  providing opportunities, both within Canada and abroad, for Canadian conservation scientists to grow their expertise in working with animal species-at-risk and add to the overall body of knowledge on the subject.

Learn more about this study and other work they do visit: https://wildlifepreservation.ca/

The North Bay-Mattawa Conservation Authority (NBMCA) was founded in 1972 by the Province of Ontario and the NBMCA’s 10 member municipalities. A non-profit organization, the NBMCA works closely with the public to balance human needs with the environmental needs of the region’s watershed. The NBMCA is one of 36 Conservation Authorities who are members of Conservation Ontario.